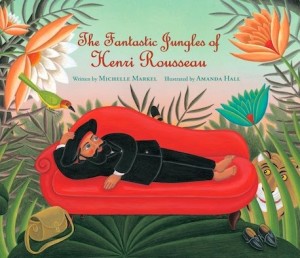 The Fantastic Jungles of Henri Rousseau by Michelle Markel is not just a beautiful, award winning children’s story about an artist. It’s an example of how a healthy dose of passion, persistence and determination can lead to a life full of joy and wonder.

Henri Rousseau is a 40 year old toll collector who wants to be an artist. Is he talented? Not according to, well, anyone. Nonetheless, this self-taught artist will not be swayed. Year after year he displays his work at art exhibits. Year after year the art critics mock him mercilessly.

Another man might choose to give up, but Henri’s passion for art and nature guides him forward.

…when he strolls through the parks of Paris, it’s like the flowers open their hearts, the trees spread their arms, and the sun is a blushing ruby, all for him.

– Michelle Markel from The Fantastic Jungles of Henri Rousseau

What I Love About This Children’s Book

As you might have noticed from some of my other Children’s Book Finds, I’m a sucker for fabulous children’s book art and illustrations. And when stunning artwork is paired with an inspiring story about a true artist, there’s no doubt I’m going to share it with you.

Henri doesn’t let anything dissuade him from pursuing his passion. Not a lack of funds for art lessons. Not critics who say mean things. Once thought of as a laughing stock, Henri Rousseau eventually becomes known as one of the “most gifted self-taught artists in history.”

Do you love art or history? Do you want to reinforce the lesson of never giving up on your dreams? Then The Fantastic Jungles of Henri Rousseau will be a real treat. The final pages offer a brief history lesson on the life of Rousseau plus a note from the talented illustrator, Amanda Hall.

Recommended for ages 5-9, though I, of course, recommend it for everyone.