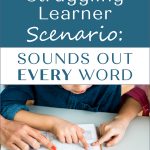 Scenario #5: When my son reads, he still sounds out every syllable in a word, even after we’ve read it 5 times already.  It’s making us both crazy!

Yes, that certainly is an exhausting way to read.  Let’s see if we can figure out what’s going on. 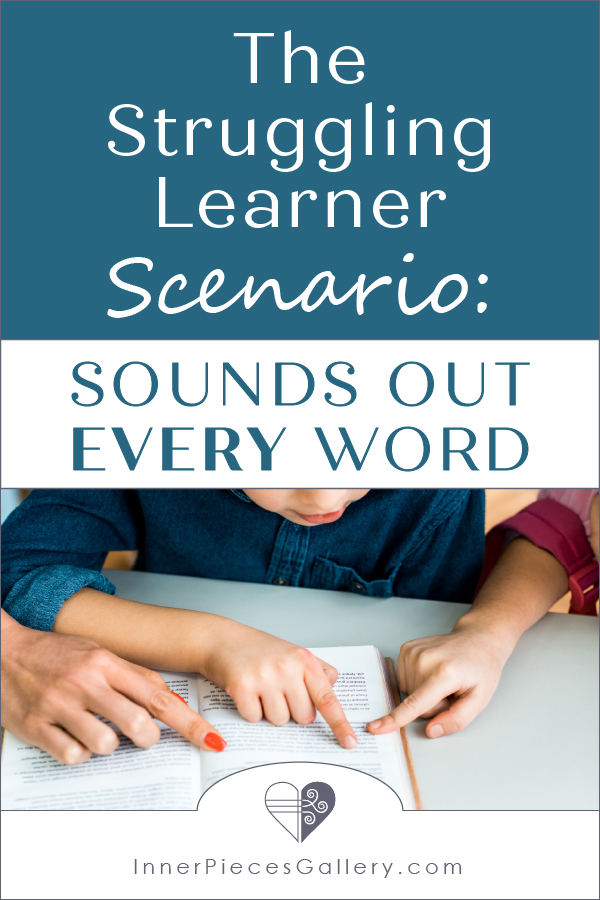 If your son sounds out the sounds correctly each time, then he likely has no trouble with letter recognition.  He remembers the sounds that each letter makes.  That’s terrific.

It also PROBABLY means that your child understands that individual sounds create words.  Even better.  I say PROBABLY because we may need to test this theory.  We’ll get to that in a moment.

Does your child randomly assign sounds as he reads?  Does he “sound out” letters that aren’t there?  If so, he may be guessing.  He’s memorized the strategy to say a bunch of sounds, then build a word, but if he doesn’t know which letters make which sounds he likely doesn’t understand the strategy.  If that’s the case, he’s falling apart at the phonics level.

Phonics involves letter recognition, which means that if I see the letter that is written in print, I know what it is and what it sounds like.  Trouble here might mean I need help with letter recognition, but it also might mean that I need to strengthen the precursor to phonics, which is phonemic awareness.  (Want more clarity on phonemic awareness?  Read this article, then keep reading below.)

Important: We really should NOT teach phonics until students have a strong foundation in phonemic awareness!

Let’s say that your son is NOT guessing at each sound, and that he really understands that a letter “b” always says /b/, etc.  A couple of things could be going on here, including…

Again with the phonemic awareness!  Don’t let the fancy term throw you.  Difficulty in this area just means that your son may not fully grasp the idea that individual sounds build words.  Let’s test this theory.

We’ve already established that as he reads, he sees a word, and is able to sound out each letter within that word.  “Spill: /s//p//i//l/.”  (Even if he struggles with that, the following exercises will help.)

Now say a word to him out loud, without showing him the individual letters.  Start easy.  For instance, the word “mop.”  Can he tell you how many individual sounds make up the word “mop,” and can he identify them?  We only want to see if he can isolate the sounds here, not tell you the letter names.

If that’s a challenge, help him practice isolating sounds using words with 3 sounds or less.

Tip #2: It’s also a good idea, at least when you first start this practice, to sound out the words together with your son.  “Let’s sound out the word “dog” together: /d/ /o/ /g/.  How many sounds did you hear?  What’s the first sound?  What’s the last sound?  What sound comes after /d/?”  Side note:  If your son gives you a blank or confused look, you may also need to review the concepts of first, last, after, before, etc.  These can be quite challenging for students with learning differences.

If your son can hear a word and isolate the individual sounds, which is essentially segmenting, then you’ll also want to practice blending.  It’s important that he understands how to blend sounds that he hears before you ask him to blend the sounds of letters that he sees.  This may seem like a very subtle distinction, but blending the sounds that he HEARS comes first.

Choose a short word.  For instance, “at.”  Do not say the word this time.  Instead, say the sounds of the word and ask your son if he can tell you the word you are building.  Example: you say “/a/ /t/.”  Refer to tip #1 above as you do.  Then ask, “Can you figure out the word I’m trying to make?”  Feel free to make a game of it.  He can play the role of detective and try to solve the word-building riddle.

I mentioned earlier that a couple of things could be going on here.  I cover even more reasons for you to explore in part 2 of The Struggling Learner Scenario: Sounds Out Every Word.

You might also like to learn more about effective strategies to strengthen phonemic awareness and other important reading skills here.